Where Are They Now? - Aston Villa 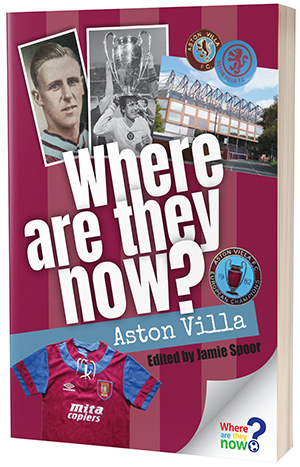 Where Are They Now? - Aston Villa

Have you ever wondered what happened to all of those players that you have seen come and go over the years? The heroes and the villains, the saints and the sinners, the stars that you talked about for years after they had retired and those who you instantly forgot? WHERE ARE THEY NOW?

The old belief was that ex-footballers became publicans or publicans or TV pundits. However, we hope that you will be interested, and in some cases amused, to find out that this is no longer the case.

The characters featured are now scattered around the globe and have provided a pleasing variety of stories. Some have done incredibly well while others have fallen on hard times.

For example - what became of the players who won the 1982 European Cup? Does your memory stretch even further back than that or not that far? In any event, we are confident that you will enjoy remembering some of the characters who have pulled on the famous claret and blue jersey over the years.

You can buy a brand new copy of this book directly from us as the publishers.

It will be dispatched immediately by first class post.

FREE postage & packing (UK only - other countries, only £2 supplement)