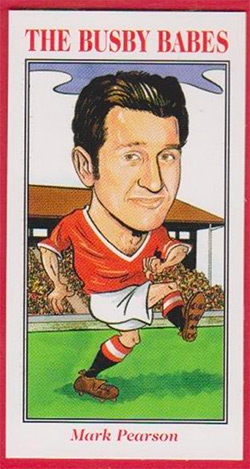 Biography: The Sheffield boy nicknamed 'Pancho', due to his sideburns, initially joined as an amateur. Turned professional in 1957 and showed signs of becoming a natural successor to his famous namesake, Stan Pearson. He was sent off twice before his 19th birthday, he couldnâ€™t hold down a regular first team place because of injuries despite his early promise, and he returned to his home town to play for Sheffield Wednesday in a Â£22,500 deal. He stayed in Yorkshire and worked as a driller for a Bradford engineering company before going self-employed in 1994 until his retirement.

Do you have any interesting, happy, or humorous memories of Mark?
If so, please let us know and we will be happy to share them with the world!

Pearson, Mark I had the pleasure of working with Mark for many years at Dominion Machinery (Hipperholme). Even more happier years in the The Robin Hood public house. 22-06-21Shaun Farnworth

Pearson, Mark I had the pleasure of working with Mark when I was a young apprentice at Hipperholme a long time ago. Football in winter and cricket in the summer plus a few beers on Fridays. 14-06-21Bob Coates

Pearson, Mark I had the pleasure of playing with Mark in the Man Youth team 1957/8 season. Mark was apprentice then becoming pro during the season. Great memories for me. 21-10-20Les Cummings

Pearson, Mark Mark was a good cricketer played against him in a friendly match between Stocksbridge and Sheffield Wednesday. He was a decent off break bowler. 02-09-20Edwin O'Sullivan

Pearson, Mark Remember when Mark played for Fulham. He made a meal of a tackle from Ian St John, and got the Liverpool man sent off. He laughed and gave a sly wink to the Fulham fans. Priceless. 19-07-20Roy Lawrence

Pearson, Mark i was at old trafford to watch a reserve game and saw pancho pearson score 6 goals against chesterfield he was incredablewas about 1957 05-02-20ian steele