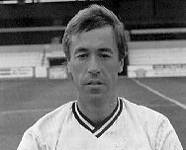 Biography: Experience gained from over 400 league games with five clubs enabled John to move into management with Cambridge. Managed Preston until December 1994. During a spell out the game worked as a Van Driver delivering parcels. Has since held management posts at Lincoln City, Barrow, Cambridge United and Histon. (Manager of the Year in 1991)