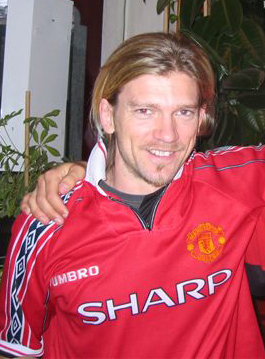 Biography: The Swedish international was signed by Manchester United for Ł4.4 million from Italian outfit Parma to provide cover for Ryan Giggs. He didn't play enough games to win a Championship winner's medal in 1999 and was an unused sub in the FA Cup Final but he started the Champions League Final victory over Bayern Munich. He missed the last two seasons of his contract with a serious knee injury and his contract wasn't renewed. Is now assistant manager of Hammarby and came out of retirement to play for them in 2010. He has also worked as a television pundit and splits his time between Sweden and Croatia where he owns property. Photo: By sv:User:Einarspetz [GFDL or CC-BY-SA-3.0], via Wikimedia Commons

Do you have any interesting, happy, or humorous memories of Jesper?
If so, please let us know and we will be happy to share them with the world!