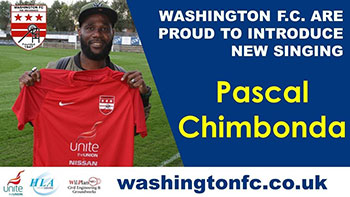 Biography: Guadeloupe defender Pascal Chimbonda is one of the more recognisable names in English football. Sometimes the cause of ridicule but sometimes a supremely talented individual capable of brilliance and disaster in equal measure. An impressive top-flight club career is testament to Chimbonda√¢‚Ç¨‚Ñ¢s ability as spells with Tottenham, Sunderland, Wigan Athletic and Blackburn earned Chimbonda a reputation as a rock in defence and even earned him a call-up for the France squad for the World Cup in 2006. Despite not playing a game throughout the tournament, he did earn his one and only cap for Les Bleus in a warmup match against Denmark. So, what happened to the man who was part of Tottenham Hotspur's last trophy triumph when he played 61 minutes of the extra-time victory over Chelsea in 2008? Remarkably, at 39-years of age, Pascal Chimbonda can still be spotted lacing up his boots for Washington. However, not the MLS team D.C United that Wayne Rooney is a member of but rather Washington Football Club of England√¢‚Ç¨‚Ñ¢s Northern League Division Two (also known as the tenth tier of English football). But don√¢‚Ç¨‚Ñ¢t feel sorry for the former Spurs man as he is more than happy and claims he wants to give back to football. It is also not the first time Chimbonda has muddied his boots in the lower leagues. After leaving Doncaster in 2012, Chimbonda dipped his toe in non-league football by signing for Market Drayton Town, but never played a game. Largely because Carlisle United swooped in and took the defender to Brunton Park. 26 league appearances followed but after one season, Chimbonda was back in France having signed for Athl√É¬©tic Club Arles-Avignon. The club folded in 2016 and in 2017 Chimbonda signed with Northern League Division Two side Washington. It is a far-cry from the days of playing at White Hart Lane in front of 40,000 spectators or sitting with a front row seat as Zinedine Zidane head-butted Italy√¢‚Ç¨‚Ñ¢s Marco Materazzi in the final of the 2006 World Cup but Chimbonda insists he is happy. Even if his Washington team based in Tyne and Wear get crowds of no more than 450 spectators per game. The former Blackburn star is taking the steps into management working towards his A-licence meaning the tactics board and chairman√¢‚Ç¨‚Ñ¢s office may become more home to him than the pitch sooner rather than later. No matter where he goes, Pascal Chimbonda continues to light up English football even now in the non-league ranks and without a doubt, Tottenham have much to be grateful to the defender for. Can you add any information here? We are keen to make the site as comprehensive and would be really grateful for your help. As you can see, we have a few details about Pascal but would love to add more. Simply fill in the form below or contact us by email. Thank you very much.

Do you have any interesting, happy, or humorous memories of Pascal?
If so, please let us know and we will be happy to share them with the world!