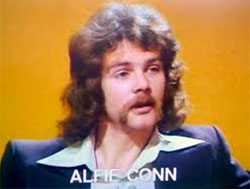 Biography: Son of a Scotland international, a stylish striker, Alfie also won two caps for his country. Was a cult figure during his two spells in England with Spurs and Blackpool. Became manager of the Captains Rest public house in Glasgow. In 2007 Alfie was included in the Rangers F.C. Hall of Fame. He was later repoorted to be as a courier for a firm called DX in Livingstone. (Won Two Scottish Championships at Celtic)

Do you have any interesting, happy, or humorous memories of Alfie?
If so, please let us know and we will be happy to share them with the world!

Conn, Alfie It took some time to settle but when he did he was a lovely player a flair player. 22-06-21 chris

Conn, Alfie I use to watch Spurs when Alfie Conn was there. He reminded me of George best! He was loved at Tottenham FC! 17-06-21 Anthonypine38@gmail.com