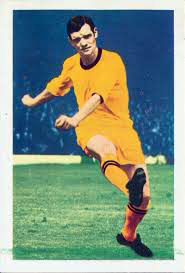 Biography: Former Manchester United apprentice, who went on to win five Scottish caps whilst with Wolves. Retired through injury in March 1979 and returned to his native Scotland. He ran his own hairdressing business in his native Carstairs and later spent periods running shops, and a hotel (in Lanarkshire). After moving to Oxfordshire, he ran pubs (in Horton-cum-Studley and Islip) and currently works at a park and ride service in Thornhill, Oxfordshire Fairs Cup Finalist with Wolves in 1972)

Do you have any interesting, happy, or humorous memories of Hugh?
If so, please let us know and we will be happy to share them with the world!

Curran, Hugh Always remember Hughie signing for my team Wolves and being excited as he had scored so many goals for Norwich. I was never disappointed and even now I look on him as one the finest players we ever had despite the glut of strikers we had at that time. His heading ability and style was terrific and he scored some great and important goals. Will remember always. 25-09-20Brian

Curran, Hugh Loved the days at Carrow Road Hugh Curran and John Manning up front always a handful for any defenders but exciting for the home crowd 09-09-20Gedgie

Curran, Hugh When I was 14 I told my school friends that Hughie would play for Scotland one day,they laughed at me,"well they are not laughing now".My halftime Millwall favourite player,even went to watch games in North London when he played for Wolves.Felt my world collapsed the day he was transferred to Norwich,kept many cuttings of his career.Underated by many but never by me. 24-08-20Mike Moody

Curran, Hugh Boyhood hero of mine while at Norwich City. Even named by dog â€œHughieâ€ after him. 03-01-19Richard

Curran, Hugh I first met Hugh Curran just after he left third Lanark he had just joined Corby town at the time he was real class to watch him play at Corby town he soon went back into league football it was a pleasure to meet him 21-12-18William Sinclair

Curran, Hugh Hugh was a godsend for Norwich City. Very well built and loved to get in were it hurt. Never shirked in the penalty area we were sad to see him leave Norwich. Did not suffer many injuries at City but i belive he did near the end of his career.

Curran, Hugh During the 1963/64 season Hugh played in the Southern League for Corby Town. He supplemented his football earnings by working as an industrial window cleaner by day and singing in local pubs in the evenings. He joined Millwall for ????3,000 in March, 1964.