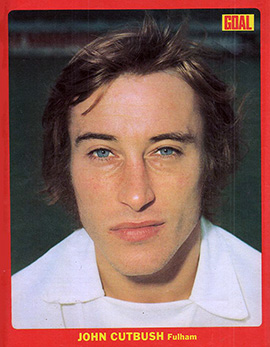 Biography: Born in Malta, John was an apprentice at Tottenham before playing over 250 games for his next two clubs. He has since worked in the insurance industry and the car trade. (Played for Fulham in the 1975 FA Cup final)

Cutbush, John Hi. I am trying to find out the name of the insurance company John worked for in the 1980s I bought a policy from you need to no the company name please Thank you. Kevin Osborne. Sheffield 20-02-21Kevin osborne

Cutbush, John Hi john just wondering where you are now.hope you remember me from the lane and more so at myrtle road(training ground)played centre forward . You took just 3 off us in training me ian pass and trenton wiggan good times pal did you marry kim by the way????? and take her to the alter in your green TR7 ha ha good times pal. please get in touch bunny x 21-01-21David Bunting(bunny 1974)hi

Cutbush, John John and I virtually grew up together, I am 2 month younger. We attended aylesford secondary and both lived in â€˜teapotâ€™, only one in the world?
From say 8 to 16 years spent a lot of our spare time at his house which was up the lane about 200 yards from my home opposite secondary school entrance. The corner shop and primary school entrance half way between.

Johnâ€™s parents Dennis and Joyce used the rear downstairs room for John and friends to play. I remember the room with large beige hardboard sheet on floor. We played Monopoly with various invented modified rules creating incredible wealth or debts.
Cricket rules were assimilated from test match commentary on background radio.
At least one litter of puppies started life there.
During most weeks John was kicking ball to garage door at side of house. I seem to remember his cricket skills also in demand.
Dad Dennis played for Maidstone, centre half I think, in Isthmian League. Gold and Black colours like Wolves. Occasionally I was invited to watch home matches when after we would join players in a massive concrete communal bath then a slap up roast dinner to follow.
One tragedy: Maidstone United history- goalkeeper had to defend goal and opposition attacker died after collision.
School PE master encouraged John in early development
At 16 years John signed for Spurs and me to 5 year indentured apprenticeship with Tilling Stevenâ€™s engineering
We lost touch, over 55 years no contact. Doncaster IKEA work reference assumes he is back in UK. We need to touch base.
Would welcome contact email or phone?
19-01-21Derek Johnson

Cutbush, John Knew John very well when he lived opposite me with Ray Evans in Edmonton. John was playing for Spurs at the time. Had plenty of good times with him. 02-12-20Alan Maynard

Cutbush, John John Cutbush was working at the Ikea Distribution Centre near Doncaster about 10 years ago. My ex-colleague was his manager and asked him if he was a football fan, he replied "er, I played in the 75 Cup Final boss" 28-08-20michael denton

Cutbush, John I played in the same Aylesford school side with John in 1962 / 65 I was on the right wing and my brother Patrick Buffini was a left winger John played centre Forward and scored a rake of goals so I always was intrigued why he finished up playing in defensive role for Fulham, I enjoyed those great school days 16-10-19Brendan Buffini

CUTBUSH, John John did go to Aylesford Secondary School, 60 - 65. I well remember playing with him in the school team - he was outstanding even then, I would really like to know where he is now?
01-11-18Rob Lea

Cutbush, John Did John go to Aylesford Secondary School in 63 to 65?