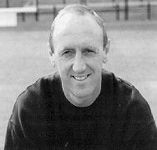 Biography: Bradford born Terry played for both of his home-town clubs and a total of over 350 league games before moving into management. Has Managed Hull City between 1991 and 1997. He joined Huddersfield Town as reserve team coach under Peter Jackson but left in 2000 and returned to Yorkshire with York City. He was sacked as manager in 2003, with the club citing financial reasons for his departure. He returned to management in October 2006 with Northern Premier League Premier Division side Guiseley. He parted company with the club in November 2007. (Won Promotion to Division Two with Bradford in 1988)

Do you have any interesting, happy, or humorous memories of Terry?
If so, please let us know and we will be happy to share them with the world!