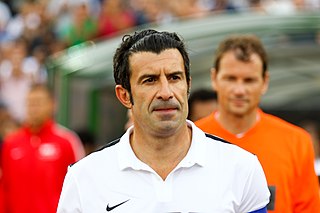 Biography: The 2000 FIFA Player of the Year, Luis Figo is still classed as one of the best ever players in the world. He won a record 127 caps for Portugal (recently overtaken by Cristiano Ronaldo) and was a star at each of his four clubs. Now based in Sweden, where he lives with his Swedish model wife, his business interests include an upmarket bar in Portugal, an exclusive networking organisation for the football world, crypto currency, and was at one time part owner of the Portuguese Formula 1 race team. To cap all of that, he is fluent in five languages! Can you add any information here? We are keen to make the site as comprehensive and would be really grateful for your help. As you can see, we have a few details about Luis but would love to add more. Simply fill in the form below or contact us by email. Thank you very much.

Do you have any interesting, happy, or humorous memories of Luis?
If so, please let us know and we will be happy to share them with the world!