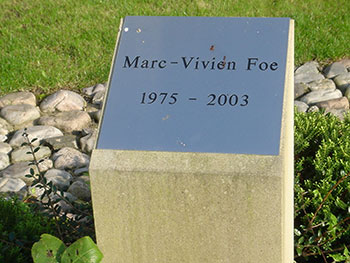 Biography: A Cameroon international who had already won 62 caps before his sudden death in June 2003 shocked the football world. He was only 28 when he collapsed and died during the semi-final of the 2003 FIFA Confederations Cup. During his short life he endeared himself to fans, fellow players and his managers. As a result, Kevin Keegan, who was Man City manager at the time, announced that they would rest the 23 shirt and there is still a plaque in the memorial garden at the City of Manchester stadium. Lens also rested their 17 shirt as a tribute. He was posthumously decorated with the Commander of the National Order of Valour.

Do you have any interesting, happy, or humorous memories of Mark-Vivian?
If so, please let us know and we will be happy to share them with the world!