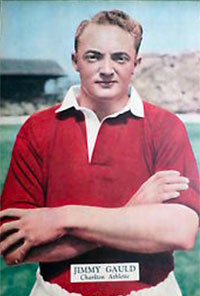 Biography: The ring leader of a 1960's match fixing scandal, jailed for four years and banned for life by the FA for his part, found work as a security guard and caretaker in Marylebone died at St Mary's hospital Westminster in December 2004 aged 75.

Gauld, Jimmy Jimmy worked in Co Mayo Ireland as personal assistant/driver during the early and mid 70s.
I got to know him quite well and he was always good humoured and did not appear to carry any baggage re his prison term..He married in France after prison and had a daughter. 05-11-18 George Williams.

Do you have any interesting, happy, or humorous memories of Jimmy?
If so, please let us know and we will be happy to share them with the world!