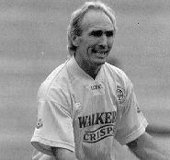 Biography: Great former Leicester City winger, became a publican in Kibworth, Leicestershire before turning into a Arthur Daley style buyer and seller. Was sent to prison for three and a half years in 2004 for laundering cannabis money. (Played for Leicester in the 1969 FA Cup final)

Glover, Len Len are you back south now mate. If so be good to meet up for a chat. Hope so its been a long time. Bob Witcher. 31-12-19 Bob Witcher

Glover, Len Len, if you read this, please get in touch on jeffbakewell0gmail.com 04-10-19 jeffrey bakewell

Glover, Len When I was a young noy, Lenny would visit my nan and grandad in Tulse Hill and we would all kick a ball around behind the flats where they lived. He was related to my grandparents and was kind enough to get me a players worn shirt when I was 10. (Keith Weller's). 21-06-19 Steve

Glover, Len My family and I met Len on a beach in Ingoldmells, near Skegness, when on holiday in what must have been the early 1970s (if not late 1960s). My sister, brother and I were fascinated by the many crabs Len had caught and put into buckets. We saw him on the same beach on several days during the holiday and got talking to him. He was very friendly with us and actually surprised my brother and I by buying us a Leicester City cap which he signed for us. We've often mentioned him in the years since. 13-12-18 Paul Brucculeri

Glover, Len The best winger to ever play for Charlton.

Glover, Len The best left winger never to have played for England and he was my school boy hero and will never forget the day I met him at Filbert St. I have been trying to get a copy of his book (From Left wing to D wing) so if any one could help thank you.

Glover, Len Lenny is my relation - my Mum's cousin and I'm extremely proud of him :D

Glover, Len I used to go to Filbert Street as a young lad - My dad who was born in Leicester and used to drive us from Nottingham for every Home match. We would sit in the double decker stand. We would have a Bovril and share a Mars bar and marvel at the dazzling display Lenny always put on. I will always remember the goal scored by Lenny, on the volley, overhead kick...Magic!!

Glover, Len Len Glover has a brother Alan. My dad Sid Glover worked with Alan Glover. Window cleaners with New Century. We maybe related down the line to Len Glover but it's Cool as it is.

Glover, Len Anyone know where I can buy the book?

GLOVER, Len I used to see him most mornings walking his dog & collecting his daily paper a few years ago - I can honestly say he is an all-round nice guy and pleasant to know! Nice One! Wayne Coleman

Do you have any interesting, happy, or humorous memories of Len?
If so, please let us know and we will be happy to share them with the world!