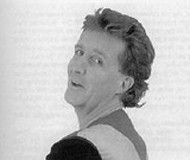 Biography: Worked for the Nike organisation coaching soccer, and as a play scheme organiser at Sheffield University. (League Cup final winners with Villa in 1975)

Do you have any interesting, happy, or humorous memories of Ian (Chico)?
If so, please let us know and we will be happy to share them with the world!

Chico Hamilton He was a great player for us (Villa) in the 70's. Remember him at Wrexham in one of our first games in the 3rd division taking a penalty with a very very long and curving run up and hitting it straight down the middle to score in 3-2 win. And many more important goals - great memories. 28-08-20 Keith West

Hamilton, Ian (Chico) I watched him play in the Southend team that knocked Aston Villa out of the F.A. Cup. Shortly after Villa signed him for £45,000. A big fee in those days, especially for such a young player. 21-08-20 Ian Cooper

Hamilton, Ian (Chico) My brother Bob and I i grew up with Ian. We use to play a lot of football one against one. Sometimes during school time.down Streatham Vale park. We would stand on the terraces watching Palace. As we got older he joined Chelsea. One of my great football memories was when he was playing for Villa. He scored a great poachers goal that night, Andy Grey scored the other in a two all draw. Ian’s mother Evelyn was a famous racing cyclist. She had a shop at the lower end of Streatham Common. Ian and I would go to work together getting the train at Streatham common. I use to think that I wouldn’t want his job as he would often be going In to clean up the stands after a match. Ian please get in touch. Tell me the name of the keeper in the Park where we would always be playing. Somewhere else we played was under the railway bridge off Glenister Park Road. Also a short walk from the road where my brother and I lived, Runnymede Crescent. Ian Please get in touch if it’s possible 17-08-20 Chris and bob young

Hamilton, Ian (Chico) Ian was never known as Chico until he joined Chelsea when one of the other players, might have been John Hollins or Boyle gave him that nickname after the famous American jazz musician. He was an outstanding sportsman who was also an excellent cricketer, athlete, swimmer and cyclist. Also while true that he scored on his debut against Spurs, it was at White Hart Lane not Stamford Bridge as suggested by others. I still have the pictures from the Chelsea programme at the next home game. He also had an unpredictable streak. On a school football trip to Amsterdam, he got bored and disappeared on his own for several hours. We were getting worried as he was our star player but he turned up safe and sound, totally oblivious to the concern he had caused. He was probably the best footballer in his age group in the uk at the time and it was a shock that he did not make it really big time in his career which started so promisingly. He was one of Tommy Dochertys favourites but was marginalised when Dave Sexton took charge of Chelsea. I wish him all the best in Spain where he apparently lives now. 16-03-20 Ashim Sen

Hamilton, Ian (Chico) I was at Stamford Bridge in 1967 when Chico became the youngest ever Chelsea goal scorer against Spurs, the same year Spurs beat Chelsea in the FA Cup Final when Peter Osgood had broken his leg and was unable to play. We thought we had a new hero in Chico but the flame burned only briefly at The Bridge!

Hamilton, Ian (Chico) My brother's digs when he was on Chelsea's books in the 60's were with Chico's mum. I remember Chico coming to stay with us on our farm and playing football with him in the farmyard - amazing skills. My mum had to tell him off one night for coming in a bit worse for wear.

Hamilton, Ian (Chico) I had the good fortune to be in the Met Police youth team which played Chelsea Youth at Imber Court in the late 60's. When the Chelsea coach arrived I was told that I would be marking Ian and that on the previous Saturday he had scored the winning goal at Stamford Bridge on his debut for the Chelsea first team against Tottenham. It was a memorable day for me although he scored 4 goals in a 7-0 victory. So I was not really marking him but I was on the same pitch...

Hamilton, Ian (Chico) I played football with Ian, we played truant from school. Playing One against one at our local park at streatham vale where we lived. Where are you now Ian. Chris Young

Hamilton, Ian (Chico) When I was 15 I used to go to brighton or box hill on the train with ian he was a babe magnet and could really pull the girls and he would be on more then one date on the same day never met anyone like him since

Hamilton, Ian (Chico) Played against Ian's school side in league game when he was not playing and we won 4-0.played them again in cup semi when he was back and we lost 4-0.what a player and so big as a schoolboy.

Hamilton, Ian (Chico) Didn't he have a women's clothes shop by the Yenton in Birmingham? Chris