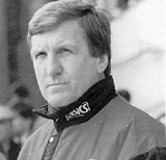 Biography: Managed a number of clubs Fulham, Luton, Wimbledon, Blackburn, WBA, QPR and a caretaker spell in charge of Millwall, was on the Lions coaching staff when he was diagnosed with lung cancer sadly died in August 2003 aged 58.

Do you have any interesting, happy, or humorous memories of Ray?
If so, please let us know and we will be happy to share them with the world!