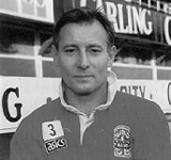 Biography: A midfield dynamo who hit the headlines when dramatically turned down by Leeds after virtually signing from West Brom, when it was discovered that he had a heart ailment Had coached at Stockport, Oldham, Shrewsbury, Blackburn and Stoke before spending ten years at Man City, then had spells at Blackpool, Macclesfield and Accrington Stanley. (Twice a League Cup winner with Man City and Norwich)

Do you have any interesting, happy, or humorous memories of Asa?
If so, please let us know and we will be happy to share them with the world!

Hartford, Asa Where is he now. I loved watching him play in the 70''s when I was a student in England. He was a perpetual motor with his beautiful left foot. 21-12-20G a koledoye

Hartford, Asa Whilst ar West Brom I trained with Asa in the week where his move to Leeds Utd as I was convelecing after a stint in Hospital
I remember at the end of the week At the end of the week the players were asked to run around the track to see who was the last man standing. Asa was in the top 4 and I went on to win but we both got moved on as I was told I would never achieve the standard of fitness required of a professional footballer. They were wrong in both cases.
I would love to hear from Asa
I Have a question to ask him about Jeff Astle and Jim Holton which IHave been desperate to ask 24-08-20Ross Mitchell

Hartford, Asa I started watching WBA in 1970, one of the first games at the Hawthorns I attended was versus Southampton and Asa Hartford scored on the half volley from 12 yards and was the only goal of the game. Great memories! 21-08-20Ian Barlow

Hartford, Asa As a young teenager I thought Asa was gorgeous and he wasn't a bad player either I supported West Brom and wrote a fan letter to him and what a shock when I received a personal reply, not only talented but a great young man too. I followed his career through playing and managing and still have fond memories of that time. 12-07-20Lesley Richardson

Hartford, Asa Asa was my near neighbour in Faifley, Clydebank. Three years younger than the crowd, for the big matches on a Sunday at Edinbarnet school, he would be picked before myself in the eleven-a-sides and before us older players. He was that far ahead of us in ability. He was, unfortunately for him, a Hearts supporter (wearing the team colours).
Not a good decision in a Celtic /Rangers area, he did get a lot of good humoured stick. Great guy. Hope to see you back in Clydebank sometime, (in
ODONNELL bar Duntocher, your big formidable centre half at the time! Still drinks there Smiddy. 16-06-19Maurice odonnell

HARTFORD, Asa When we about 15 me and my friend went to the training ground which was in Spring road at the time. Asa was a young up and coming footballer so we asked for his autograph and he obliged by signing Eusebio Pele in our books! Great laugh at the time I think he actually signed his own name at a later date Pam Huskisson

Hartford, Asa I worked Saturdays, and scabbed a couple of hours off to watch the match...before kick off, Iasked the chap next to me...'who`s this Hartford then'. He said a young guy down from Scotland come thro` the youth team. During the game he took a long pass on the chest, turned, and hit the ball, all in one movement....into the back of the net from at least 30 yards....I said 'Hello what have we got here???'