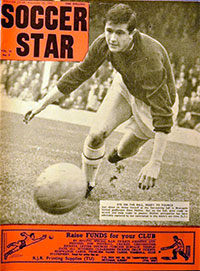 Biography: The Welsh international goalkeeper brother of John. Ran his own painting and decorating business in London now lives in retirement in Guildford, Surrey.

Do you have any interesting, happy, or humorous memories of Dave?
If so, please let us know and we will be happy to share them with the world!

Hollins, Dave Hi Dave I don’t know if you remember me but I was with Jackie on the day she met you on Brighton seafront. We worked at Southdown motor services together and became great friends I have photos of her and me taken on the beach at Rottingdean my surname was Gladman then. I have tried to find her many times without success it would be so lovely to hear from you. We have just had our 60th wedding anniversary too and live in Southwick near Brighton. It would be wonderful to hear from you both. We have two children a boy and a girl two grandchildren and four great grandchildren. I have left my e-mail address if you would like to make contact it would mean so much to me. Here’s hoping 23-06-21 Christine Blackman

Hollins, Dave Sad to hear the passing of Ian St John today. Have a great memory of you (my hero in those days) saving a penalty from the Liverpool legend. Hope you are well in these crazy days. 02-03-21 Stu Luckley

Hollins, Dave Hi Dave. I know you wont remember me but I was one of the young lads collecting autographs after training at Newcastle but a couple of times you gave me a lift home after you signed the autographs to win grove road next to where you lived. You gave me some chewing gum . It was wriggleys double mint and I had never seen that brand before. When I got home I saved that chewing gum for years before it disappeared. Probably my mother threw it out. Lol. I just want to tell you thanks again for the lift. I think your car was a green triumph herald. I thought you were a great goalkeeper for Newcastle and wales. Cheers Ron Kettlewell 21-10-20 Ron Kettlewell

Hollins, Dave Dave Hollins - we met you and Jackie in Scotland last year. Want to congratulate you on your 60th wedding anniversary this year. Judy and Dave. 20-10-20 Judith and Dave robinson

Hollins, Dave My Dad has known all the Hollands Family before they played football. I understand they all played at the local in Guildford which had a great team on a Sunday Morning. The ones who played with Dave were Johnny Burns who played for West Ham, Ray Drinkwater , QPR, Portsmouth, and few others who played with top teams And never lost a Sunday match. John Hollins also was there but I don't think he played.
all I can say was when the packed up playing they all went to local pub Holroyd Arms On the Aldershot road Guildford and John to young to go in side and to sit out side and have a Lemonade 30-09-20 Michael Woodley

Hollins, Dave Dave and Jackie played indoor bowls at Wey Valley indoor bowls club until last season 2018/19. They live in Guildford but are moving close to Brighton where Jackie grew up. 03-08-20 Jo clark

Hollins, Dave Dave and family lived next door to us during his spell at Newcastle. Came to my parents house for a new year party and ended up playing cards until dawn with my uncles and older cousins. Very good goal keeper and very nice guy. 26-03-20

Hollins, Dave I was the school goal keeper and a Newcastle supporter. I saw Dave make his debut for the Magpies against the all powerful Spurs team that did the double. Dave had a blinder saving a spot kick from Danny Blanchflower. He became my hero after that. My mate Tony Hudd is a sports writer and arranged for Dave to wring me on my 60th birthday. He told some great stories about his time on Tyneside. 29-10-18 Bob edmunds

Hollins, David Dave Hollins brother of John Hollins played for Forest in a loan deal with the Stags when Alan Hill got injured. The significance was that Duncan Mckenzie was loaned out to Mansfield in return and the Stags could have bought him for Five Grand

Hollins, David I remember watching Hollins playing for Aldershot in September 1970, he was showered with coins from the Hartlepool supporters, Hollins wore a cap in the second half and before the end of the game he was picking up the money that had been thrown at him by Pools fans. To my knowledge Dave Hollins now lives in Woking and gave his nephew Chris Hollins on advice with his career when he relised it lay outside football.