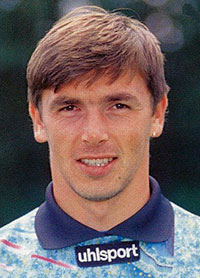 Biography: A goalkeeper who rolled up at Charlton asking for a trial and ended up saving a penalty which got them promoted to the Premier League, is now an entrepreneur wuth interests that include an interior design company and also in the banking world as a consultant with Austrian-based Hypo Group Alpe-Adria, also also acted in a couple of low budget films.

Ilic, Sasa I remember going to watch St.Leonards Stamcroft as a kid and Sasa Ilic was outstanding! Having only watched local football he was the first keeper I saw live where I was taken aback at how good he was. You just knew he wasn't going to be at that level for long. He left the club and went to Charlton and became an instant hero 17-04-19 Danny

Do you have any interesting, happy, or humorous memories of Sasa?
If so, please let us know and we will be happy to share them with the world!