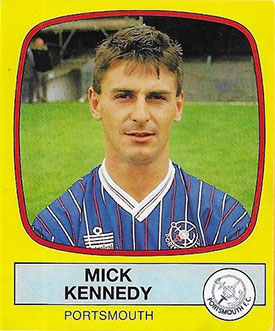 Biography: Kennedy took few prisoners as a no-nonsense hard tackling midfielder. This earned him the wrath of many a referee but also the seal of approval from the club's supporters. As a Republic of Ireland international, he won two caps and could also take a mean penalty. Now lives in County Clare in Ireland and coaches a local team, Lifford A.F.C. having previously run his own soccer school in the area.

Do you have any interesting, happy, or humorous memories of Mick?
If so, please let us know and we will be happy to share them with the world!

Kennedy, Mick You might care to update your site to say that Mick died a while ago. At least I know this website is a waste of space. RIP Mickey Kennedy my first favourite player. 30-08-20Andrew Foster