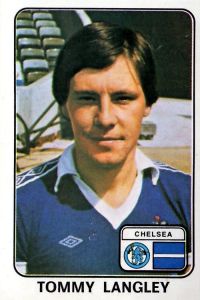 Biography: Broke into the first team aged just 16 years and nine months when he made his league debut. This was against Leicester City in the 1974-1975 season, which was to end in relegation, but it was another three years before he was fully established in the first team even though he had scored the goal at Wolves which clinched promotion back to the First Division. As partner to Steve Firmieston, he was the leading scorer in the first season back in the top flight, then scored 16 goals more in 1978-79 when the Blues were relegated. A rare bright spark, he was voted player of the year. Reluctantly sold to QPR for £425,000 in August 1980 by Geoff Hurst after failure to win promotion. After hanging up his boots, he worked for Nashua in Bracknell where he was in dealer sales for copiers and fax machines. Worked for Chelsea radio and then Channel Five Breakfast News as a football reporter. Now lives in Bagshot, Surrey, is a presenter on Chelsea TV's Matchnight Live and is a players agent.

Do you have any interesting, happy, or humorous memories of Tommy?
If so, please let us know and we will be happy to share them with the world!

Langley, Tommy BEFORE ITS THOUGHT .... YES I AM HIS BROTHER......
In my honest and as unbiased as possible opinion. Tommy was heart led and/or missguided with his career. He and all our family are and have been Chelsea through and through forever. The team at Chelsea were, at his time there, an amazing group of players and so like brothers its unbelievable. But management appointments (yes, including Mr Hurst )were inept. Cliquey would be a word to describe the way they managed. In my, maybe biased, opinion my brother was ONE OF the best English strikers never to play full the full England team. His love and loyalty to the Chelsea badge and the honestly 90% crap managers there ruined a potentially great talent. He is a proud and happy man and still Chelsea to the core.
Anyway if you feel the need to reply please do. I played to a semi pro standard myself and would never claim to know the pro game but in a relevant way football is football across the leagues and standards. Proud brother of course but honest and I believe realistic. Best wishes to all. STAY SAFE KEEP WELL. Rob Langley 13-03-21Rob Langley

Langley, Tommy Hi Tom, I truly hope you receive this. We have started a group on Facebook of all the Basingstoke guy's of our era. If you are interested and would like to share some of your memories contact me at ulurob@aol.com Take care Bobby 30-08-19Bobby Billen