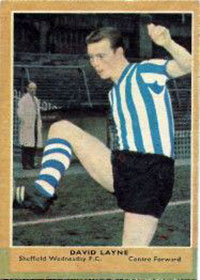 Biography: Banned in a match fixing scandal he became a publican in Bolsover is now running a pub in Meadowhall near Sheffield.

Do you have any interesting, happy, or humorous memories of David?
If so, please let us know and we will be happy to share them with the world!

Layne, David Used to stay B & B when David & Pat ran the Prince of Wales in Rotherham, had some great times. Hope you are both well? 22-01-21Dave Saunders ( Bristol)

Layne, David My hero in the early 60's and remember seeing him score consecutive hat tricks at home v Man City and Blackburn Rovers. Used to see him and his wife in the Sheaf Island on a Wednesday and he as always been a perfect gent and good company with his knowledge of how the game should be played. 18-01-21Chris Drake

Layne, David Met David and Pat in Tenerife, spent most nights with them, what a gent, loved talking old football with him and lovely Pat! 18-11-20Philip Dale

Layne, David David married my cousin Pat in the sixties, I went to the wedding and also the reception at the Chequers in Whiston, Rotherham, Keith Ellis was the publican