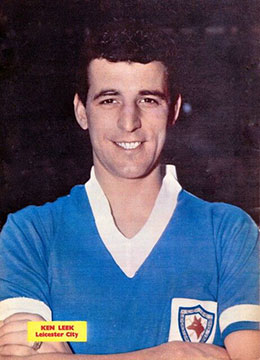 Biography: Welsh international scored twice in the 1963 League Cup Final lived in Northampton and worked for Ford Motor Company in Daventry before retiring in 1995, died in November 2007 aged 72.

Do you have any interesting, happy, or humorous memories of Ken?
If so, please let us know and we will be happy to share them with the world!

Leek, Ken I was also at Oldenburg when Ken Leek played in station matches. I followed his career, seeing him play for Northampton, Leicester and Wales. Why he didn't play in Leicester's Cup final Team is a mystery to me.

Leek, Ken I was in the RAF at RAF Oldenburg in Germany with Ken and we played together in the unit side.He was the best header of a ball I had seen and as our job in Radar allowed us alternate mornings and afternoons off we would get out the ball (our sargeant loved sport!) and allowed us to train on our station football pitch.I played goalkeeper and with 2 or 3 more lads we would practise shots in and corners and crosses.On these Ken would rise mnajestically and shout where he was going to head to in the goal,bottom right,bottom left,top right etc. and I still couldn't save them.He was a great lad,his hair was his crowning glory.He took some stick from the lads when his friend Dai Dower,flywieght champion was heavily beaten as Ken had said he was unbeatable.When we were demobbed I,as an avid Walsall fan,went to Northampton to see him play and it was clear he was a class above our division.It was a pleasure to have known him and it is only recently I learned he had passed away in 2007.I found this out because Walsall loaned Karl Darlow the young goalkeeper from Notts. Forest and it turns out that Karl is the grandson of Ken!! What a small world.Best of luck Karl.I hope you do as well as your granddad and have inherited some of his lovely disposition. LeslieMason 82 Sandringham Avenue Willenhall West Midlands WV12 5SX