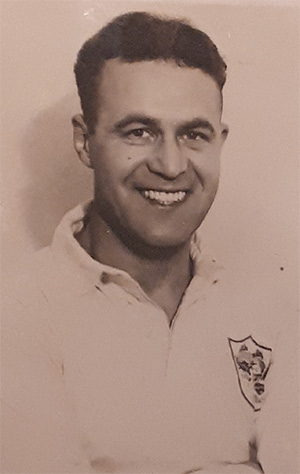 Biography: Settled in the Norwich area after playing over 250 games in their colours. Retired after working as Circulation Manager for the Eastern Counties Newspapers.

Do you have any interesting, happy, or humorous memories of Bill?
If so, please let us know and we will be happy to share them with the world!

Lewis, Bill When I was at school in Norwich we used to practise on the local park in about 1948/49 time. Bill used to watch and then said he would give us some training. Although he was a Left-back I recall, he thought all footballers should be able to kick equally with both feet. He told us to bring a soft shoe or slipper to training and made us put this on our natural foot. It was painful to kick the old leather(lead) football with that foot so naturally you used the other. I was naturally right handed and footed but in a year my left was the strongest foot and remained so until I put away my boots when I was over 50 - now 79! Maybe some of the current coaches could learn something from this since about 90% of modern professional footballers are one footed. If I were the manager I would halve their pay until the could use both feet. Keith Jackson now in Hastings.

Lewis, Bill I worked at ECN for a period in 1964 and turned out for the football team. Bill Lewis decided to take some practice penalty shots and since I was the nearest body, stuck me in goal. His first attempt came towards me like a cannon ball, I put my body behind it (foolishly as it turned out) and the force of the shot knocked me off my feet and shot me and the ball straight into the rear netting. I declined a second opportunity. Paul Aspland-Los Angeles

Lewis, Bill My Mum (Ann Cook) used to babysit for Bill (and wife, Ruth's) son Richard, and I was born, some years after his retirement as a footballer, in the house on Thunder Lane next to their bungalow. He was Uncle Bill to us, and was always a bit of a joker. He brought scrap paper home from ECN for us to draw on, and always gave us a box of crackers for Christmas. At one match during his playing days, while warming up before the game, Bill kicked a ball into the crowd which hit my Mum. 'Sorry Ann!' he called out, much to the surprise of fans standing around her.