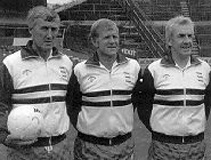 Biography: One of the hardest players of his era held management posts at Swindon; Nottingham Forest; Walsall; Arabic Sporting Club (Kuwait) Doncaster, Birmingham and Qatar, was also been a successful businessman with ventures including Dave Mackay Club Ties.

Do you have any interesting, happy, or humorous memories of Dave?
If so, please let us know and we will be happy to share them with the world!