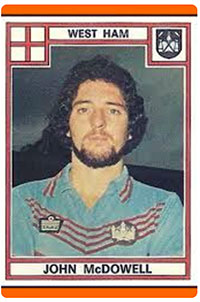 Biography: An England under 23 international who was assistant manager of Bristol Rovers before becoming a publican in Essex, before opening a small publishing company, moved to Teneriffe and where, for four years, he ran a British supermarket in Playe de Las Americas. Now back in England.

McDowell, John John we both got school colors at Sandringham secondary modern way back in 1965 I used to run tuck shop. I live at in Spain now. Drop me a line if you get time. Cheers fn. 16-05-21Andy callow

McDowell, John Hi John. Hope you are well. You may or may not remember me but we played football together with either Clyde Best, Clive & John Charles, Steve Gill and some others at Langdon comprehensive, East Ham. (69 - 75) Was of course very happy times for me then, magical days watching you at Upton Park and then taking the mickey at school. I was known as Elfie then. Great days. My dad was scout leader to Tommy Taylor also. Love to hear from you.
Jamie Robertson 28-12-20Jamie Robertson

McDowell, John Hi John, I hope you are well. I'm sure you won't remember but around 1970-71, we were neighbours. You lived opposite me in Plashet Grove (my family lived at 99 and my Mum was a good friend of Tina Moore). Every so often I would clean your white Capri for a few bob! Oh the old days! :) 05-10-20Mark Cunningham

McDowell, John What happened to your cousin Mary McDowell from toilet street ?
07-09-20

John McDowell Hi John how r u ? Do u remember me I was yr Stock Taker in the day when u had the pub in Braintree , still around I'm 79 this year 24-08-20George Sargent

McDowell, John Worked with John for a few years in the late 90's . We were in publishing. Great guy , great lunchtime banter over a few beers. A lovely guy. 11-08-20Russell Coombes

McDowell, John I enjoyed seeing you play for the Hammers in the seventies but it was great to see you at Dagenham FC. I got your autograph and I hope that you had a great night along with the boys. 09-06-20Geoff

McDowell, John Did you have a stepbrother called Adrian? 07-11-19Bradley Tredinnick

McDOWELL, John Hey John, yes it's me! Wondered how you are and your two girls. tdavey@ford.com xx 29-10-18Tina

McDowell, John Hello it's Beryl I hope you remember me from the Moby Dick or Ye Ole Kings Head Chigwell. Hope your well love to catch up with you again.