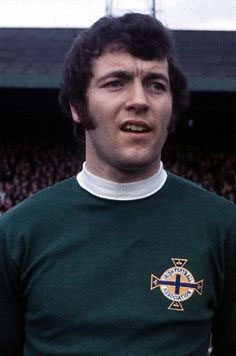 Biography: Worked in sales and management with a building company, became a businessman with a grocers and now betting shops on Teesside.

McMordie, Eric I went to the same school as Eric McMordie - Orangefield Boys Secondary School. Played lunch time 5 a side football against him several times. I remember he was a very good and tricky player at that time. 21-12-18 Clive Calderwood

McMordie I think the dates are wrong as I watched him at Middlesbrough when I was kid in the 60s and early 70s. John Woodhead

McMordie, Eric Eric McMordie was a contemporary of George Best and had a trial at the same time at Man U. He was offered a contract but returned to Northern Ireland as he was homesick. Soon after he returned to England with Middlesbrough

McMordie, Eric Had a drink with a couple of guys before a Northern Ireland match in 1972. Turned out the guy who knew everything there was to know about Eric McMordie was his dad.

Do you have any interesting, happy, or humorous memories of Eric?
If so, please let us know and we will be happy to share them with the world!