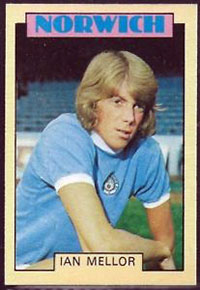 Biography: Is a commercial executive with the P.F.A. having previously worked for sports manufacturers Puma and Gola

Do you have any interesting, happy, or humorous memories of Ian?
If so, please let us know and we will be happy to share them with the world!

Mellor, Ian Ian worked with me at Dormer Tools at our office in Stretford Manchester when he was signed by Manchester City. He was a super young man and worked hard at our office. We were all delighted when he was signed but sadly I lost touch with him as I was rushed into hospital in December 1971 and was unable to return to work hence I never saw him actually play at Maine Road. 13-02-21 Ron Parker

Mellor, Ian I am a Brighton fan and just bought a 1976 Joe Kinnear Testimonial match day programme! Jimmy Greaves is in the line up and many more famous players. I would like to get them all together for a reunion! Some of them have sadly passed away but it would be fantastic to achieve this ! 31-08-20 Jozef Kis

Mellor, Ian Played cricket against him in South Lancs cricket league. I played for Brooksbottoms and we had some good battles 22-11-18 Michael D James

Mellor, Ian went to school with Ian(Sale Moor Secondary) and played in same school football team. Ian and me were best friends but we lost touch after school. I remember Ian started as a postman before becoming a professional footballer. I now live in Scotland where I moved in 1975 although I was born in Edinburgh before we moved to Sale when I was about 3.

Mellor, Ian Worked with Ian during his time working for Gola. Great guy to know and work with. Would be nice to get in touch with him, just to say hello! Does anyone know his contact details?

Mellor, Ian I used to play football with Ian for Renold Chain and Mersey Villa. He also played cricket for Renolds, along with his father and uncle Arthur. They were good times!!