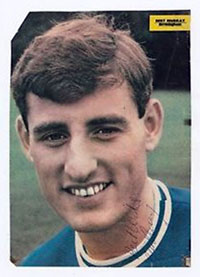 Biography: An Outside-right when he came into the first team in October 1961 before being converted into a right back by Tommy Docherty and Dave Sexton. Established himself in the team at the expense of Peter Brabrook, to form a formidable partnership with Ken Shellito. He was even a dependable emergency goalkeeper when needed. Played in midfield when Docherty switched to a 4- 3-3 formation and his 17 goals in 1964- 1965 was the highest total from a winger since Dick Spence chipped in with 19 goals 30 years previously. A League Cup winner, he saw his saw his time at the club ended by the emergence of Peter Osgood and was sold to Birmingham City for £25,000. The former England under-23 international went onto become a publican at the White Horse and then the Bull in Market Deeping, Lincolnshire.

Do you have any interesting, happy, or humorous memories of Bert?
If so, please let us know and we will be happy to share them with the world!

Murray, Bert I went to school with Bert Murray. Queensbridge Road School in Hackney London. The school was later given a posh name Dame Edith Cavell. With Bert at school it was all football. He knew he was talented and football at school was his passion. I was there with him until we all left in 1958. Yes, you could say 'the boy did good!'. 19-06-21 Chris Clements

Murray, Bert Bert presented me with my Brighton Boys certificate in 1971, for playing for the district while he was a Brighton and Hove Albion player 28-02-21 Chris Gunn

Murray, Bert Can anyone give me details of when Bert acted as emergency goalkeeper for Chelsea, please email me Thankyou.- I am updating my book on Chelsea goalkeepers. David. (Even Bert himself if he reads this as Bonetti is now dead!) 21-11-20 David Sawyer

Murray, Bert The Murrayâ€™s were a footballing family. I played with brothers Bob and Jimmy at Leyton and Clapton 24-10-20 Tom Jenkins

Barry Charles Woolgar I remember Bert Murray as a high scoring winger at Chelsea in the 1964 /1965 season he was sold because of
His involvement in the Blackpool hotel
Escapade and not because of the arrival of Peter osgood !
I have many happy memories of Bert at Chelsea during the1964 /1965 season and he also scored the first goal i saw at Chelsea a penalty against
Everton in the 1963 /1964 season !
Many happy memories 07-09-20 Barry Charles Woolgar

Murray, Bert My Grandad is called Robert William Murray and he said, he had cousin called Bert Murray who you use to play for Chelsea and now here I am. By the looks of things had a great career. 01-09-20 Louis Crouch

Murray, Bert He used to have the pub in the village. Market Deeping. He was a top squash player I heard. Always a great welcome and tips for the horses. Never had football on in the pub though. Top guy 24-08-20 mike marshall

Murray, Bert I lived next door to Bert. A little younger than him. He was a school boy international and used to practice in the Haggerston flats playground and I was always the goalie. 10-02-20 Don Billows

Murray, Bert Bertie was my best mate at queens bridge road school. we both played in the same school team. but my mate was head and shoulders above everyone. he played for Hackney London and England schoolboys and went on to a great career. Great footballer. 08-02-20 Dennis banks

Murray, Bert I worked with his wife at Ridgeways in Old Street for many years 01-12-18 valerie forsdick(keyes)