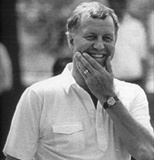 Biography: Windsor born 'Ossie' reached god like status at Stamford Bridge. He forced his way into the first team after scoring 30 goals in 20 reserve team outings, and duly delivered two goals in a League Cup tie at Workington in December 1964 on his debut. He became a regular thereafter but suffered a share of heartbreak along the way, missing the 1967 FA Cup Final as a result of a broken leg. Three years later he joined an elite band of players to score in every round of the competition including the final, he was also in target in the Cup Winners Cup Final victory over Real Madrid and the League Cup Final. He fell out with Dave Sexton and after being dropped and transfer listed, Southampton paid a club record £275,000 to take him to the South Coast. 'Ossie' returned to 'The Bridge' for one last stand but the club was in decline and he retired in September 1979 to run the Union Inn in Windsor. Later turned his hand to sports promotion and was youth team coach at Portsmouth. Was a very popular after dinner speaker; match day host at Chelsea as well as television pundit until his death in March 2006 aged 59 following a heart attack at a family funeral. His Ashes were laid to rest underneath the penalty spot at Shed End.

Do you have any interesting, happy, or humorous memories of Peter?
If so, please let us know and we will be happy to share them with the world!