Biography: Frank managed a few pubs in Northampton after he finished in football. The Racehorse and the Golden horse. He then decided to leave the pub trade and returned to his trade as a toolmaker when arriving back in Cardiff. Cardiff City had enrolled him as an apprentice to give him alternative employment if he failed to make it in football. He retired from the trade at 63. 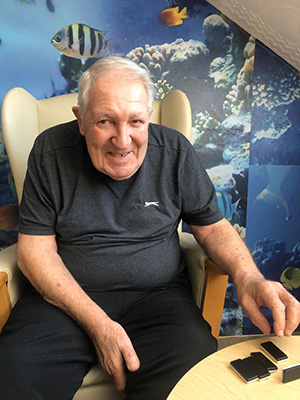 He is now 81 (2021) and in ill health. Unfortunately in the last few years he has suffered from Alzheimer’s maybe football induced. Very sad and now lives in an elderly persons nursing home in Cardiff.

Do you have any interesting, happy, or humorous memories of Frank?
If so, please let us know and we will be happy to share them with the world!

Rankmore, Frank In the 1960s as a boy I used to support Peterborough United, The Posh, whenever I bought a programme and saw Frank's name there, we were confident of a win, he dominated the air, cross balls, no worries, with Willie Duff in goal, and Ollie Comnie in mid field, what a team, ask Arsenal! Thank you Frank, oh let's not forget Derek Dougan, what a team. Thanks again
04-09-20Philip Howard

Rankmore, Frank Hi, Frank is my father , he still lives with his wife Veronica in Splott . They returned to Cardiff after his football career finished due to injury. My two elder brothers and I celebrated his 80th birthday with him last weekend. He remains a gentleman ... and â€˜cuts a dashâ€™! He has five grandsons he adores and spent years playing football in the garden with him. He was named after his father , Frank... and had both a son and then grandson named Frank. He is and will always be special to us. 02-02-20Katherine

Rankmore, Frank frank was a super defender also a real gentleman he worked for the st davids hotel (5 star) in cdf bay for years great fellow.

Rankmore, Frank Frank's mother (I think it was) lived opposite my grandparents in Walker Road, Splott, in Cardiff. I was - and still am - a fanatical Bluebirds supporter, though nowadays I live hundreds of miles away from Cardiff, near Peterborough, where Frank spent much of the latter part of his career. I collected autographs and Frank managed to get me not only all the autographs of the Cardiff City squad, but - somehow - all the autographs of the Swansea Town (as they then were) and Newport County squads too! How on earth he managed that I'll never know. All these years later, that autograph book remains one of my most treasured possessions ...