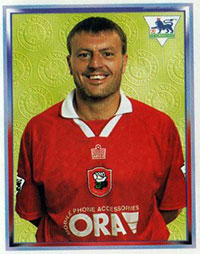 Biography: Fifth highest appearance maker of all time in the Football League having played from 1982-2004.In all levels of football he played in excess of 1000 first team games. An ever present in Oldham Athletics team that won the second division title in 1991 he was surprisingly released by Oldham & went on to join Barnsley where he spent seven seasons. He went on to become player/coach at Conference club Scarborough in 2005 before becoming manager at Northwich Victoria.He then became assistant manager at York City. He went on to coach Leeds United under 18's in 2009 & then the reserves in 2010. In February 2012 he became caretaker/manager of Leeds United for four games before returning to his role as manager of the reserves & under 18's. Neil was named new head coach of Women's Super League Two side Doncaster Rovers Belles in December 2017.

Do you have any interesting, happy, or humorous memories of Neil?
If so, please let us know and we will be happy to share them with the world!