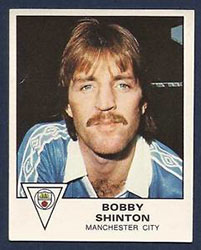 Biography: Is now running his own double glazing business in Worcester after moving from Cambridgeshire.

Do you have any interesting, happy, or humorous memories of Bobby?
If so, please let us know and we will be happy to share them with the world!

Shinton, Bobby I met Bobby back in 1980 when I was going out with his niece Kim Keeling. I loved her. He was sound Bob. Used to go over the 4 in hand pub in W.Brom. Bryan Robson was always in there. Great days. Johnny Lloyd. I will never forget. 12-07-21John Lloyd

Shinton, Bobby I used to stand next to his Mum at Fellows Park when Bobby played at Walsall. Top player & a top guy ðŸ‘ðŸ» 24-12-20Kevin Wilcox

Shinton, Bobby I watched Bobby Shinton in the 70s whilst he was plying his trade at Cambridge United and his ability as a player was head and shoulders above most players at that level. He has left a lasting impression on me and it was a pleasure and a privilege to have watched him. 06-12-20Will Jeffery

Shinton, Bobby I used to style bobbys hair when he played for Wrexham . Great personality - his wasnâ€™t bad either ðŸ˜ 25-08-20julie mullen

Shinton, Bobby I knew him when he was playing for Lye Town in the West Midlands regional league when he signed his first full time pro contract with Walsall. And when he called at the club he was so excited. I used to train with the club as I was a referee on that league, but naturally never officiated at any of their games.

Shinton, Bobby You gotta love this man, excellent football player. Even better physio! After a recent car accident Bobby has been helping me with my physio to get me walking again. It's not what you know, it's who you know. Top Man