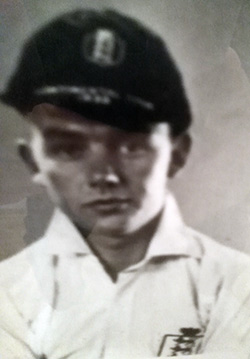 Biography: Les Smith won the Wartime Cup Final with Brentford in 1942 when he scored both goals at Wembley in a 2 nil victory over Portsmouth. He won it again with Chelsea in 1945. He remains the youngest player ever to appear in an FA Amateur Cup Final and won 15 War Time and Victory caps with England as you can see from the attached photograph of the illuminated address. Owned a radio and television shop in Aston was living in retirement in Lichfield, Staffs until his death in 1995.

Do you have any interesting, happy, or humorous memories of Leslie?
If so, please let us know and we will be happy to share them with the world!