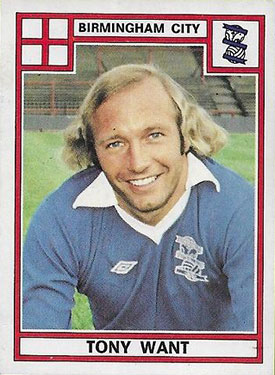 Biography: Failed to really make the break through at White Hart Lane and ended his career at Birmingham where sells fish in the local fish market having worked as a Warehouse manager for a frozen food company after a spell in a family business in Solihull.

Do you have any interesting, happy, or humorous memories of Tony?
If so, please let us know and we will be happy to share them with the world!

Want, Tony I remember Tony Want playing for Spurs, though only as a squad player. When picked, however, he was a steady defender, as I recall. During that time, he came to my school, in Willesden, where I think he was involved in helping coach the school team. I was most impressed to see him participate in a game, or perhaps just a kickabout, in the school playground, dribbling around as if he were George Best - impossible to get the ball off him - though of course this was a way lower level than top division football. Want is quoted in Dave Bowler's biography of Sir Alf Ramsey - they were both involved at Birmingham City at the same time. 30-08-19 mike

Want, Tony Going through some old photos we found a rather old and very damaged photo of a couple of Spurs players from the 'old days'. We thought one of them was of Tony we knew him through a friend of mine, Steve Herbert, who I worked with and played football with. We remember going to to his 21st birthday party, Pat Jennings, Terry Venables, John Pratt and a lot of the Spurs first team were there - as a full on Spurs fan it was an amazing occasion.