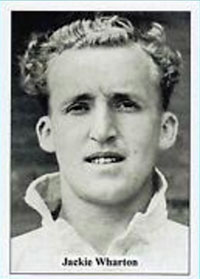 Biography: Can you add any information here? We are keen to make the site as comprehensive and would be really grateful for your help. As you can see, we have a few details about Jackie but would love to add more. Simply fill in the form below or contact us by email. Thank you very much.

Do you have any interesting, happy, or humorous memories of Jackie?
If so, please let us know and we will be happy to share them with the world!

Wharton, Jackie During the 1950â€™s Jackie Wharton and his son Terry lived next door to my family in Turton Street, Bolton in what was a council house. At the time Jackie played for Blackburn Rovers and he was kind enough to take my autograph book to Ewood Park and got all the players to sign the book. Apparently Terry and I used to play out together but I never remember football being a participation activity. 19-07-20Harry Owen

Wharton, Jackie Great player and amazing Grandfather. Scored on debut like his son Terry. First father and Son to ever score on debut and both play pro football at the same time. Jackie died May 1997 peacefully in the Worcester Royal Hospital. 17-04-19Rob Waribg