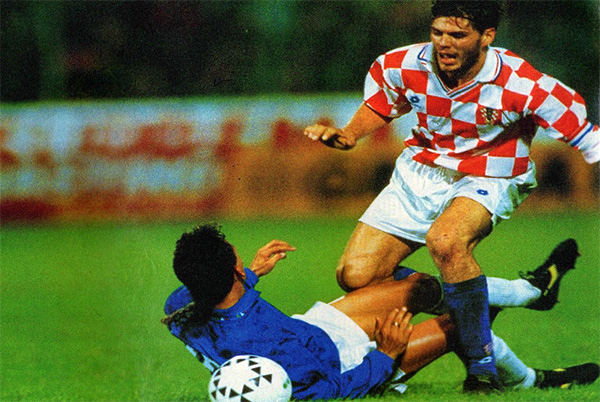 Biography: As England fans look forward to the rescheduled European Championships this summer, they will look to the draw and see Croatia as their main opponents in Euro 2020 Group D. The two nations have developed something of a rivalry over the last decade, each costing the other dearly on certain occasions. That rivalry is now 25 years old, with the two teams first meeting in a 1996 friendly – a drab 0-0 draw – not long after the Croatian War of Independence. The most accomplished (and highly-decorated) player on the pitch that day? – Zvonimir Boban.

Boban was a star for AC Milan throughout the 1990s, winning Serie A four times and being a key part of the 1994 Champions League-winning side. A midfield general, Boban had the right blend of tenacity and skill. He could play anywhere across the midfield, even acting as an auxiliary striker when required. A legend in Croatia, Luka Modric spoke of Boban as his hero when accepting the 2018 Balon d’Or award. Boban was the captain of the much-celebrated 1998 Croatian World Cup team, which finished third in the competition.

Boban has had an interesting career since retiring in 2002. Always seen as a cerebral type, he got a degree in history from the University of Zagreb not long after hanging up his boots.

Boban is a regular pundit in both Italy and Croatia, and he is known for his no-nonsense approach (think of Roy Keane’s punditry, and you aren’t far off). If you are frustrated with VAR decisions in football today, you might want to blame Boban. He worked as FIFA Deputy General Secretary from 2016-2019, and he was said to be heavily involved in FIFA’s decision to implement it at the 2018 World Cup.

We have only begun to scratch the surface of Boban’s life after football, but it’s certainly been interesting. Finally, if you happen to be on holiday in Zagreb, keep an eye out for Restoran Boban – the restaurant he owns. Apparently, the food is delicious too.

Do you have any interesting, happy, or humorous memories of Boban?
If so, please let us know and we will be happy to share them with the world!