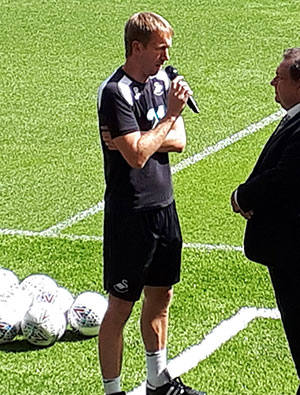 Graham Potter - from Solihull to Swansea

Solihull-born, Potter started out as a trainee with Birmingham City. He was handed his debut by Terry Cooper, who himself had been one of the most complete full-backs in the game and was one of the few Blues' managers to get the team playing out from the back.

It is clear, therefore, that Cooper was a great influence on Potter; if not for his playing career, during which his most meaningful stints were with York City and Macclesfield Town, but instead for his coaching career.

Potter oversaw steady progress over eight years at Swedish club Östersund, who he guided to three promotions and even to the latter stages of the Europa League, where they were knocked out by Arsenal despite winning the second leg away from home in 2018.

He established a clear playing ideology while in charge there and encouraged his team to construct moves with care and precision. It didn't take long for Potter's methodology to reach his players, as evidenced by the fine team goal scored by Oliver McBurnie during the 2-1 win at Sheffield United in Potter's first competitive match in charge.

Although there is political unrest at Swansea City due to a perceived lack of investment and readiness to sell key players at low prices, Potter has not used that as an excuse. If anything, he has embraced the opportunity to work with the existing squad and demonstrate his excellent coaching ability by helping elevate players to new levels.

For example, youngster Joe Rodon went from EFL debutante to one of Swansea's most impressive players in the space of 6 months as he starred in his debut for the Welsh side during the 1-0 win over Preston North End in August 2018. His talent as a ball-playing centre-back could not be clearer. 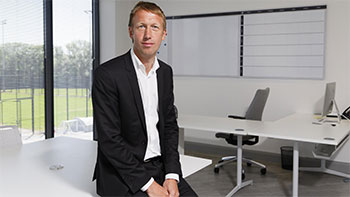 But Potter's influence on his players is not just tactical. He graduated from the Open University in 2005 with a degree in Social Sciences - the study of society and the relationships between individuals within it - and he clearly believes that players and staff connecting with one another on a human level will have its advantages on the pitch.

At Östersunds FK, he encouraged them to engage in community activities, such as performing in theatre and music productions designed to take them out of their comfort zone. Those methods might seem unusual, but have proved effective in building a team spirit, which is such an important aspect of success.

Can Potter work his magic at Swansea? His side lost almost every key player but were still considered amongst the best sides in the Championship during Potter's first year. They were 3/1 with Betway as of 16th August to win promotion during his first season and the club is certainly in the right hands.