Where Are They Now? - Footballers

Where Are They Now is designed for you if you are a football fan who is as curious as us to find out what happened to your favourite footballers after they retired from playing.

Where Are They Now? - Footballers 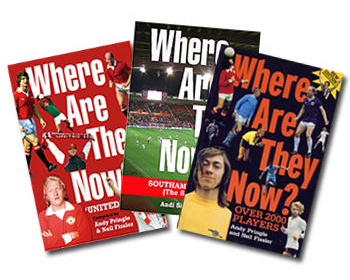 Have you ever wondered what happened to all of those players that you have seen come and go over the years? The heroes and the villains? The saints and the sinners? The stars that you talked about for years after they had retired and those you instantly forgot?

If so, Where Are They Now? is definitely for you!

Not all players end up running pubs or become TV pundits! It's no secret what Gary Lineker is up to these days but what about the many thousands of players who have slipped from public view? The first edition of "Where Are They Now?" uncovered some fascinating post football stories including the former Arsenal striker who became Iceland's Finance Minister; Millionaires; Bankrupts; Vicars; Comedians; Singers; a Phil Collins lookalike... and one or two publicans!

Where Are They Now Books

This whole project began with a book entitled 'Where Are They Now? - Life After Soccer'.

This proved to be incredibly popular and led to the formation of this site as well as a number of club specific titles. So far, the series comprises of Manchester United, Chelsea, Portsmouth, Huddersfield Town, Aston Villa and Liverpool. Forthcoming titles include Arsenal, Southampton and West Bromwich Albion - watch this space!

Played in same junior school team as him for a short while. Always a top player and always a top lad. Really glad he went on to a very successful career in football. Well done Gary

So sorry to hear of the loss of Paul Hinshelwood.
Had great time playing football with him as a teenager, when he visited Bristol with his brother Martin.Condolences to his family and friends

I know his playing days are over. Is he still okay? lovely chap

He was incredibly fast and we also played in the school cricket team where he was a fast bowler.

The FA Cup win against Leeds in 1976 when Dave scored for Palace was a massive giant killing at the time.

I was at Gresley Rovers when he was manager. What a great person.

My dad played for Tottenham, he worked at Heathrow airport as John Price said he met my mother Sue. He was a talented footballer who I played had the privilege of playing just 5 a side football with and had him as my coach as a youth. My dad has been my hero, loved hearing the stories of him and Jimmy Greaves, Dave Mackay etc. Love to hear from anyone that has known him in his life.

Lives a few doors down from me. Has a property company and lives in a lovely converted barn. Seen him walking his dog with his wife and spoke to him but was only told who it was a few years later. Lovely fella and total legend.

Wullie was brought up in Castlemilk Glasgow. I think he was born 1952/53. I went to Kings Park secondary school with him. He signed for Manchester City when he was 16 from amateur club Glasgow United or Glasgow amateurs. He played for Scotland and had a good career. He’s now part of a Buddist community.

He was my great great uncle! My Nan was Dorothy Leafe / Clayton 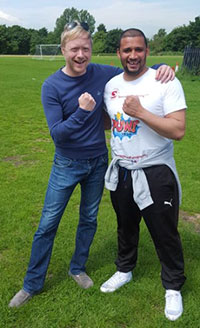 When we researched the first printed edition of 'Where Are They Now?' in the 1990's, footballers were already incredibly well paid by conventional employment standards but prior to that, players had to find a new career once they had hung up their boots.

This meant that we unearthed plenty of interesting and un-expected stories, many of which are found on the site. Sadly, there were some we could not re-produce for legal reasons - sorry!

Playing professional football, particularly at the highest level should ensure that modern players should not have to worry about money for the rest of their lives. Thankfully, this has not limited the number of fascinating tales for us to tell. For example, were you aware that former Sheffield United midfielder Curtis Woodhouse became British light welterweight champion when he took up professional boxing, having apparently 'fallen out of love' with football? If the rumours are true, he was not just a winner in the ring! At one point, he was considered to be 50 to 1 outsider to win the title and a successful £5,000 scooped him a cool £250,000 when he defeated defending champion Darren Hamilton.

Where is football now?

When do you think that the Premier League should re-start?

Where are they now? – Boro players who played League Cup’s season opening game 8 years ago.

If you know of any other stories that may interest fellow fans, please do let us know.